Some time ago, Moore Place tenant Kenneth Dill began volunteering at Second Harvest Food Bank.  What began as a notion to volunteer a couple of days each week developed into so much more.   From the start, Kenny recognized the significant impact Second Harvest was having within Charlotte and beyond.  “There’s over 900 agencies in North and South Carolina that we distribute to.  We’re the largest foodbank in the southeast.”  In addition to the broad reach of Second Harvest, Kenny was struck by the sheer volume of food they supply.  “Between 2014 and 2015 we’ve donated over one billion pounds of food.  One billion!  That’s a lot of food.”

As impressive as these numbers are, it was Second Harvest’s mission that really spoke to Kenny.  “You shouldn’t have to make a choice between paying your rent and buying groceries.  No one should have to make that choice.  And that’s what we’re doing—we’re giving food so people don’t have to make that choice.”  Kenny could even see Second Harvest’s mission in action within his own community of Druid Hills.  A local pastor, Charlie Montgomery, shops at Second Harvest each week in order to provide food for community members who are in need of support.  An unpaid volunteer, Kenny has been able to convert around 40 of his volunteer hours into $100 toward Pastor Montgomery’s food ministry each month.

Nancy Hagerman, Second Harvest’s Volunteer Coordinator, describes Kenny as, “extremely ambitious.”  She goes on to say, “Kenny knows the need that exists throughout our 19 counties that we serve and does not want to sit for one minute!  He pushes to do more and more each day he is here.”

In addition to his own work and Second Harvest, Kenny has taken to enlisting the help of others in their mission.  Moore Place tenant Sadia Ibrahim recalls, “Kenny talked to me about it, and the organizer came here one time at the Helping Homeless to Housing (HHH) meeting and talked to us.”  Since then, Sadia has joined Kenny in volunteering at Second Harvest nearly every day of the week.  Nancy reflects fondly on their work remarking, “Every morning I go into the warehouse to see what the volunteers will be working on for the day and I usually see Kenny or Sadia first.  They are already busy at work—both smiling and usually asking me how many volunteers we should have for the morning and afternoon.  I so much enjoy their great attitude and friendly spirit.”

Like Kenny, Sadia was immediately struck by the importance of Second Harvest’s work.  “They help a lot of homeless people and some others who can’t afford to buy food and things.  They help a lot.”  Sadia has also appreciated the social aspect of her volunteer hours.  “You meet different people.  Bank of America, Wells Fargo…oh, I can’t even remember most of the companies’ names.  They are nice.”  Nancy thinks very highly of Sadia’s leadership skills and observes, “Sadia has a beautiful smile and made me feel welcomed from my very first day.  She works right beside many different volunteers from executives of corporations, college students, professional groups, to our special needs volunteers, and gives her warm smile with guided directions for the daily projects…If someone is slacking off, Sadia will kindly let them know the great need that is out there to feed so many hungry people.”

Last month, Kenny and Sadia were honored at Second Harvest’s annual volunteer banquet.  Kenny was given a plaque and named “Volunteer of the Year.”  Sadia was also 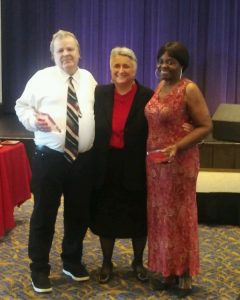 recognized for her tireless dedication.  For Sadia, the award let her know that, “Whatever you’re doing is not forgotten.  They appreciate every little thing that you put in for them.”  Kenny revealed that winning Volunteer of the Year, “was kind of a shocker…A big joy came over me that I got recognized for something I’d been doing and interested in.”  Folks at Second Harvest, on the other hand, were not surprised.  “Staff and especially our other regular volunteers – all were delighted to hear that both Sadia and Kenny were being honored at this year’s Partner Appreciation Luncheon, knowing they both are well deserving of the award,” observed Nancy.

Kenny and Sadia both plan to continue their work.  Kenny encourages everyone to volunteer at Second Harvest.  “You never know who’s hungry and who’s not hungry.”