Tabby’s life has been peppered with tough decisions:

But when Tabby talks about the tough decisions she has made in her life, she doesn’t consider herself to be a victim or blame others for the challenging situations she found herself in. Instead, Tabby gives credit to all the people who helped and supported her as she worked to improve her circumstances.

After travelling across almost every state in the country and setting up a home in Tacoma, Washington, Tabby packed up her newborn daughter and left an unhealthy relationship to return to her home state of North Carolina. Unfortunately, it wasn’t long after moving back to NC that Tabby’s drug and alcohol use got in the way of her ability to care for her daughter. After asking her mother to care for her daughter, Tabby’s addictions continued to worsen and Tabby found herself living in a series of abandoned houses and homeless camps around Charlotte. For 12 years Tabby experienced homelessness, she was in and out of medical facilities, and she had frequent run-ins with law enforcement. For Tabby, living on the streets only exacerbated the mental health and addiction struggles she had experienced since age 13. 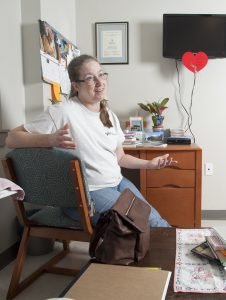 Today, Tabby still remembers the man at Urban Ministry Center who helped her find treatment, food, and ultimately a home at Moore Place—the man she credits as “the reason that I’m here.” For Tabby, and so many like her, the UMC has done so much more than provide lunches, mailboxes, and showers. Through the UMC, Tabby found the mental health counseling and addiction treatment she needed. And through Moore Place, Tabby has found the stability necessary to maintain her sobriety for the past 9 years.

Although Tabby regularly credits others for helping her get to where she is and blames herself for her downfalls, when Tabby tells her story, it’s impossible not to recognize the courageous and strong woman that she is. Moore Place didn’t save Tabby, they simply provided the most important resources—shelter, treatment, and support—that Tabby needed so that she could save herself.