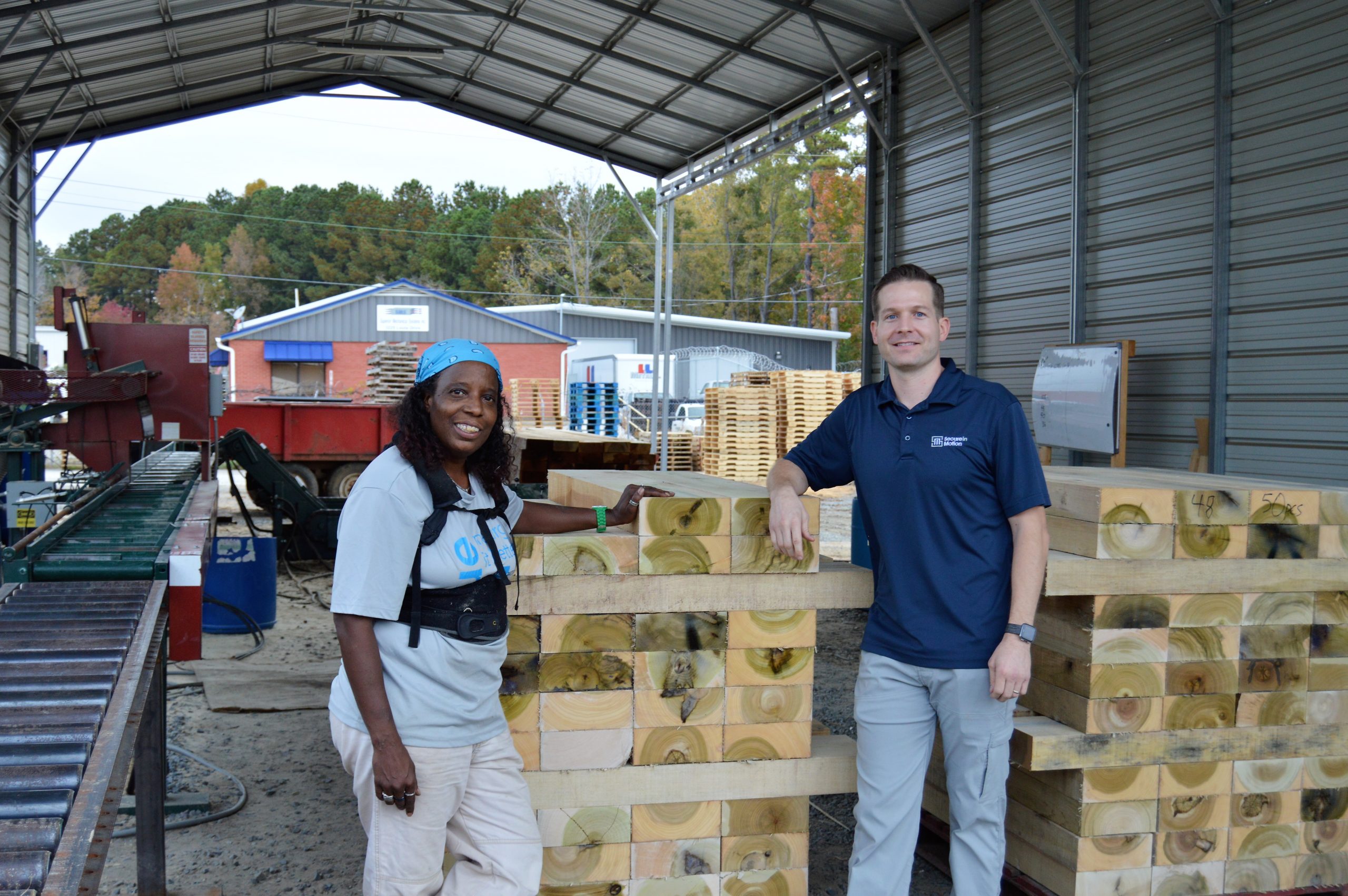 A typical day in the life of Eveco probably sounds familiar to most of us:  Getting up, going to work, coming home, tending to household tasks, and unwinding for a little while.  I visited Eveco at her workplace not long ago to see first-hand the work she’s engaged in at Secure in Motion, a local wood packaging company that designs custom crates and pallets.  Before finding Eveco at her work station where she was sweeping up the sawdust from a long day’s work, I had a chance to meet her boss Marc, who was very curious about Urban Ministry Center.  “I hired someone just the other day who listed Urban Ministry Center as their address.  Who are you guys?  What do you do?”

I couldn’t help but smile.  Not only do I love every opportunity that presents itself to share our work with the community; I also found it affirming to know that Marc saw Eveco for exactly who she is – a hard-working employee who is eager to learn each step and each task involved in wood packaging.  He didn’t know Urban Ministry Center.  Didn’t know Moore Place.  Had no idea that Eveco’s residency there means that she has traveled through a dark tunnel of mental health battles and chronic homelessness, only to emerge with the stability of housing, employment, and a robust network of support.

I’ve had the honor of spending some time with Eveco recently because her “unwind” time at the end of each day is devoted to artwork – her greatest passion.  Eveco’s artwork is featured on the front of Urban Ministry Center’s Honor Card this year – a non-traditional gift option through which UMC sends holiday cards to donors’ lists of friends and family members for whom they would otherwise be purchasing traditional holiday gifts.  As beautiful as the artwork is each year, I know many UMC supporters’ favorite part is the back of the card, where a brief artist bio and picture can be found.

During our working together to create this year’s Honor Card, Eveco shared with me life’s twists and turns that led her to that dark tunnel of homelessness.  Even as a child, Eveco recognized that she was struggling in ways that her peers were not.  Sitting still, remaining calm, trying to slow down her rapid-fire thoughts all felt out of reach.  It wasn’t until a diagnosis of bi-polar disorder during late adolescence that she finally had a name to assign the battle she’d been waging for years.  Despite these challenges, Eveco was able to maintain her employment and her apartment for some time. 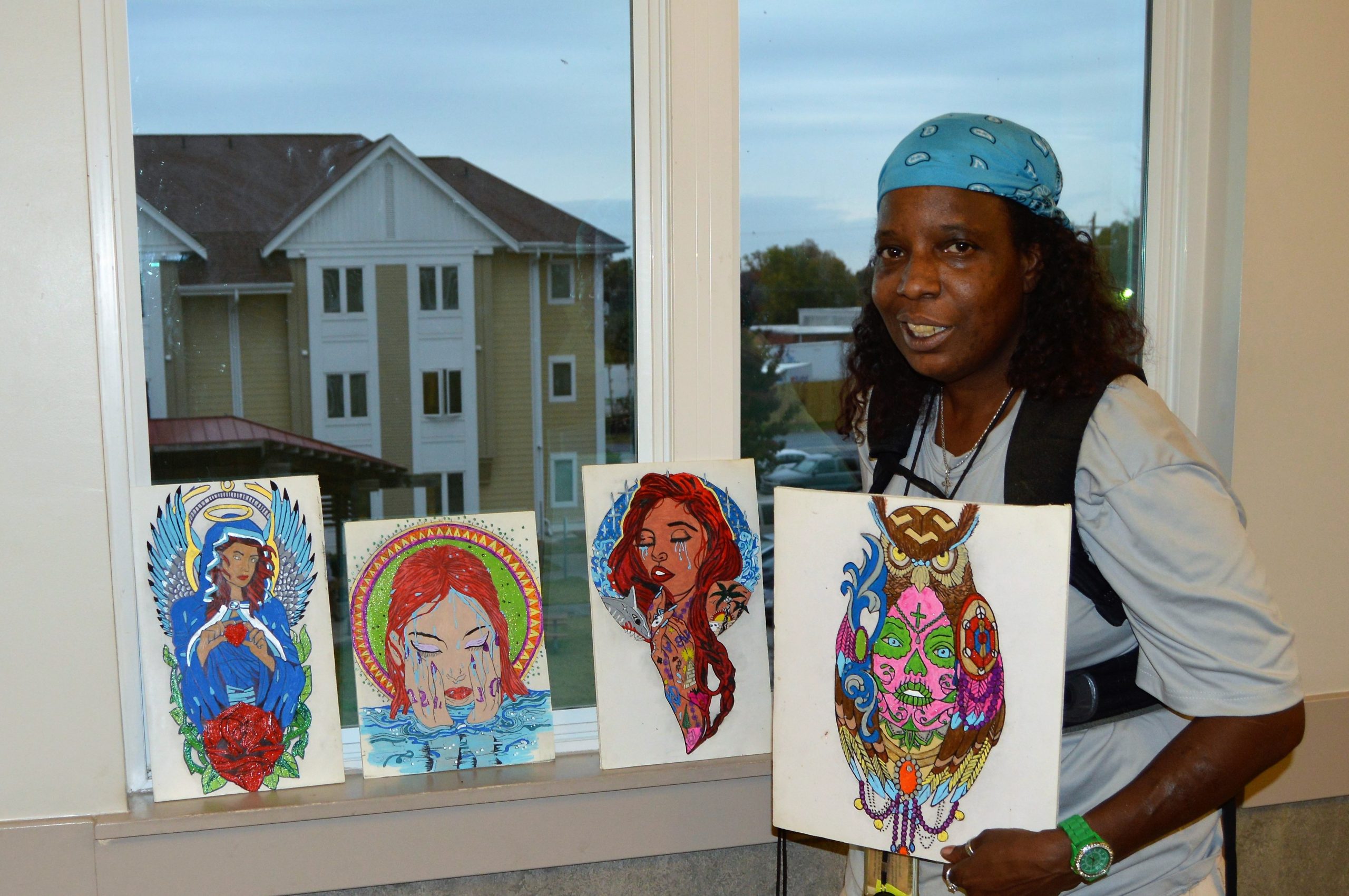 Job loss and a grease fire in the kitchen changed everything.  The rent money order (along with the receipt that could prove its existence) all burned to ash in the blink of an eye.  Like many other Charlotteans, Eveco did not have the resources available to replicate the rent money she’d lost.  Jobless, homeless, and struggling as always to maintain her mental health, Eveco eventually found her way to Urban Ministry Center.  Having engaged in artwork since early childhood, it is no wonder that Eveco was drawn particularly to UMC’s ArtWorks945 program, where she had a space to share her talents.  For her, “art is like breathing.”

While ArtWorks provided some light at the end of the tunnel, that was hardly the end of the road.  Eveco reflects on the services offered at Urban Ministry Center.  “One person might tell you where to get food.  Another person might tell you where to go to find out about housing.  Everyone is willing to help.  If you ask for help and stick with them, you’ll end up housed.”

That’s certainly been true for Eveco, who now has her own apartment at Moore Place.  With the safety and stability of housing, she is thriving once again – working, caring for her grandmother, and developing plans to start her own business that will feature her original artwork.  Eveco has had her share of struggles along the path home.  Yet she claims with confidence that she is, “bruised but not broken.”