Housing Solutions: What Can We Learn from our Past?

When former Charlotte Observer editor and former Urban Ministry Center Board Chair Jennie Buckner first moved to Charlotte in 1968, she made what would seem like an odd choice in today’s world: She rented a room at the Y. 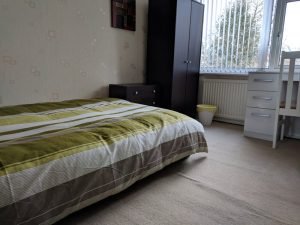 For years, YMCAs and YWCAs provided housing solutions for a wide variety of people facing an immediate need. They joined with SROs (single room occupancy housing) and boarding houses to provide a critical housing resource for people in transition or in need of more affordable rent. Conservative estimates indicate that during a time in America’s history, between a third to a half of those living in cities, either were boarders at one time, or took in boarders.

Indeed, as we look back on much of the 20th century, we find far more housing solutions that were flexible and communal.

For various reasons, some related to income-discrimination, our country began to divest from these housing solutions. From the mid-1970s to 1990, an estimated 1 Million SRO units were destroyed. The Ys across America, including the Dowd Y here in Charlotte, began to step away from their role in the housing marketplace.

Today, we are seeing a rise in communal and fluid living, with great stories of sharing a home through Airbnb, or micro-units in NYC that include shared meals. But, this new embracement of communal living does not typically serve the same diversity and income ranges that our historical housing solutions did.

Charlotte has a severe lack of affordable housing. More than 21,000 affordable units are needed for people with extremely low income (less than 30% Area Median Income). From our work, we know the faces and stories of many of those 21,000. We know the potential that could be set free in the life of our community with housing stability. That’s why, I want to be on the record as a proponent of a continuum of housing solutions.

Beyond standard apartments, what other solutions should our community pursue? Tiny houses? Accessory Dwelling Units (think Mother-In-Law Suite)?  Micro-units?  More SROs? What are the different avenues to fund housing solutions?  What are the innovations in how we build housing?

Both Urban Ministry Center and Men’s Shelter of Charlotte have a history of housing innovation. Urban Ministry Center was the first local leader to implement the “Housing First” approach, most visibly seen in the creation of Moore Place. Men’s Shelter of Charlotte was an early leader in “Rapid Rehousing,” short-term housing supports to move guests quickly out of the shelter into housing.

As leader of the newly merged organization, I look forward to working with you to continue to innovate and push the envelope to ensure everyone has a place to call home.