Serving together to keep love strong

February 14, 2022
For Roof Above volunteers Frankie and Carolyn, serving their community together is what keeps their love strong.
In 1972 Frankie and Carolyn lived on the same street in Baltimore. The following year Carolyn left Baltimore to head to North Carolina.
“I moved away, and only visited Baltimore to see family – I never ran into him, and I never looked for him”, Carolyn says. During that time, Frankie worked as a deacon at his church and Carolyn worked in the school system. While apart, they each had a deep desire to serve their communities – in whatever capacity possible. 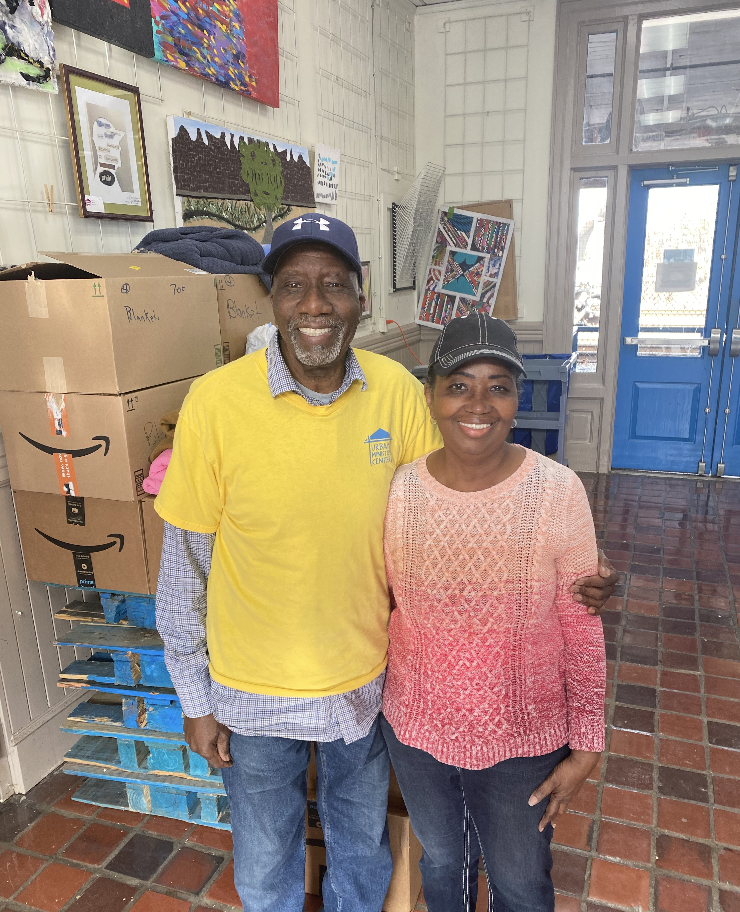 In 2010, Frankie and Carolyn met again via Facebook and Carolyn sent him a message. “I asked him if he was the one that used to live on the same street as me. He said yes, and gave me his cell number.”
For many years, Frankie and Carolyn dated long-distance from Baltimore to Charlotte; visiting each other by riding the Amtrak. On one of Frankie’s trips to Charlotte, he happened to be sitting next to former Urban Ministry Center executive director Dale Mullennix. “It was like it was meant to be for them to meet”, Carolyn says. During their conversation, Frankie talked about his love for service and the church and how he could contribute to the work to end homelessness. Frankie was stunned when Dale then shared his work with Urban Ministry Center and invited Frankie to get involved in the work. “When I first started volunteering, I would help out with the laundry. I did that for many years and was able to meet and help people. Now I work sorting material donations with Carolyn and we’ve been supporting the work of Roof Above since,” said Frankie.
Frankie has been volunteering now at Roof Above for ten years and Carolyn for six. They share that there is something beautiful about serving together. When asked how service has ignited their love Carolyn said, “Our heart is in everything that we do. Because we enjoy the same things, serving our community is another way for us to remain together. We schedule our vacations around this work. It is embedded into our relationship and it keeps us moving.”
Happy Valentine’s Day!